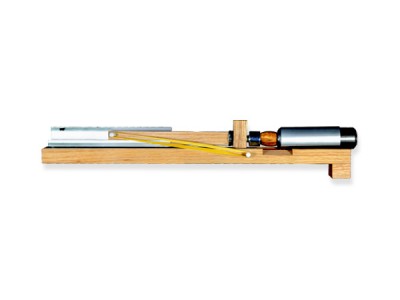 The Texan -Inertia Nutcracker is made from the finest red oak and aluminum extrusions. The nutcracker is rubber band powered for fun and easy use.

The world’s most popular cracker is back! This fun to use nutcracker was invented by Dr. Haywood Turner in Columbus Georgia. It derives it’s distinctiveness from it’s source of power and the results it achieves—it produces “whole kernels”.

Dr. Turner noticed that while his wife was cracking pecans there was a space between the shell and the nutmeat and if a quick impact could be provided the shell would shatter before reaching the meat.

The means for providing the quick impact was decided upon to be common rubber bands producing kinetic energy (energy produced by motion) and the desired results of whole kernels was produced by a restriction in travel of the impact transmitted through a piston to the nut.

The impact was contained by placing a heavy anvil on the other side of the nut. Since heavy means difficult to move because of inertia, hence, the name “inertia nutcracker”. The cracker itself is classified as an impact type nutcracker. Cracks soft shell pecans with ease.

There are no reviews yet.

Be the first to review “Texan Inertia Nutcracker” Click here to cancel reply.